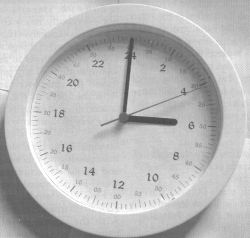 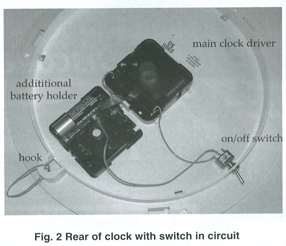 Time is an Illusion

Lots of people get round this by operating to a sequence. The trains run in the correct pattern with no relationship to time at all. For example an hour could be any length of time from 10 minutes to 90 minutes dependent on how difficult the shunting in the yard is. I’ve found that without the rigor of operating to a clock like the real railway then some of the operating skill is lost. With a sequence the next train is never late as it is never 8:15 until the 8:15 arrives. There is no reason to stop what you are doing to run the train in its correct time slot because time never moves until you obey the sequence.

Having gone to the trouble of writing a timetable for my son Philip’s layout (Trenton) it seemed quite natural to accept the challenge of operating to a clock. However running to real time as I’ve already stated is not an effective option. Time needed to be speeded up in some way. This is a problem that has been addressed by the railway modelling fraternity before so I looked through the back numbers of the specialist press. What I was looking for was an idea that was cheap and simple and able to run without attention from the operators.

What I found were three methods which all fell into the following groups.

A. Interfere with the works of a mechanical clock so that it runs more quickly.

This usually involves cutting teeth from the escapement wheel so that it travels further between each tick. The sort of article that deals with this method starts “take a cheap alarm clock” and then goes through the alterations. I actually did this when years ago I changed over to a radio alarm. It isn’t as easy as you might think. For a start you need to remove the teeth evenly or the escapement jams and removing the teeth doesn’t necessarily make exact multiples of time. There are other side effects, the clock gives out a pronounced tick as it operates, it needs winding frequently, the extra forces involved knock the devil out of the escapement reducing reliability and once the teeth are off you can’t go back if it’s too fast. Last but not least. The cheap mechanical alarm clock of the sixties is the retro masterpiece of the new century so it isn’t cheap anymore. Always assuming you can find a place that sells them who wants to go back to being blasted out of bed by the wild clanging of bells? We seem to prefer the more gentle approach of the clock radio and so the mechanical alarm has disappeared.

B. Build a clock using an electric motor, which operates at a faster speed than a normal clock.
This sort of article comes from the era when Lisle Street and the Tottenham Court Road in London were lined in shops selling military surplus electrical components. Unfortunately the supply of redundant Lancaster bombers has run out and the shops have all gone. I did come across geared motors but these were not clock works and so I would have had to engineer a way to drive another hand to record hours. Said motors were also not cheap and worked from a mains supply which offended against one of my rules, I never use mains supply on a layout. This method is a possibility but it is really a project in its own right with its own engineering challenges and as such failed to meet my criteria of cheap and simple.

This sort of article in its earliest form started “I wrote the following program in Basic for my Sinclair spectrum”. They then progressed to more sophisticated computer languages before ending in reviews of software to do the job. This area failed because not everybody has a computer and software is expensive (typically around £40 for this sort of thing). Added to this Philip’s layout lives in my workshop at the bottom of my garden which means the computer has to come in with the locos at the end of every session to avoid naughty folk smashing their way in to remove them.

So there I was back at the start with time passing no quicker. A cup of tea and a review was needed. What did I Clock facewant? Easy, to speed up the recording of time. How much? Not a lot really. I’d learned from my early experiments with the cheap alarm clock that between 4 and 6 times was too fast, as shunting movements can’t be speeded all that much. If I could double the recorded speed that would mean a full day would then take 12 hours.

At this point my eye caught the clock on the wall. Battery powered, Quartz regulated hands for hours, minutes and seconds and costing less than a fiver. The face divided into 12, as is the way of clocks, but what if I divided the face into 24? I could call each half revolution of the minute hand an hour and one complete revolution two hours. The hour hand would need to indicate that an hour would pass in half an hour hence the face would need to be divided into 24. So when finished the clock would have 00 at the top and 12 at the bottom with 6 where 3 normally is and 18 where 9 would be.

Things looked good, there was only one thing to do and that was to try it, so out came paper and a compass. I drew in the centre lines and drew a circle with the compass then divided the circle into 12 equal parts. Working from the top of the circle I bisected the angle between there and the first division on the circumference this gave me the first of my 24 required divisions. These were stepped off using the compass. Starting at the top again I then bisected the new angle between there and the new first division this gave a point which the hour hand would show as the half hour this distance was again stepped off on the circumference. I repeated the process to find the quarter hours. The minute hand uses these marks to indicate the passage of 1.25 minutes for the quarter hours 2.5 minutes for the half hours and 5 minutes for each hour division. You can tell by now that I used to work in a drawing office. Still the upshot of all this is that by dividing the clock face up in this way the works indicate that twice as much time has passed than actually has. Once you get used to reading each half of the clock face as a separate hour then it works quite well.

At this point Brian Roper the Editor enters the picture. He’d popped over to my place to try out the timetable for the layout and had a good look at the clock. His opinion was that he could do the face on his computer and tidy the whole thing up a bit, so that if people wanted one they could down load it and print it with out having to stab themselves with a compass. His opinion was proved right and in less than a day I was able to download a clock face which I printed onto a self-adhesive sheet. I stuck this to a piece of 6 m.m. M.D.F drilled a hole in the centre into which I fitted the works and there it was. A clock which indicates time at twice normal speed, needed no attention from the operators and cost around five pounds.

As Colin has mentioned, I was able to make up a clock face to Colin’s specification using my computer as well. Back of clock as the old fashioned cut and paste method. The result can be seen in figure 1. If anyone would like a copy, then download it from here (183kb gif file).

In addition, I considered that removing the battery of the clock when the running session is finished was a nuisance. So I obtained another clock backplate that hold the battery, and fitted a small on/off switch in the circuit. See figure 2.