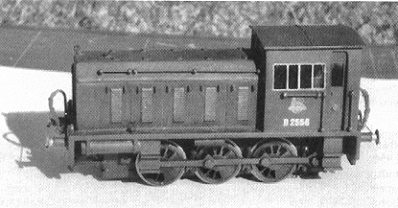 Silver Fox resin loco “kits” offer the easiest possible entry into the world of non- RTR locos. In fact I hesitate to use the word kit to describe their products, since state-of-the-art RTR requires almost as much assembly. What you get is an unpainted one-piece bodyshell, cast in “milky-bar” resin rather than injection moulded in plastic; almost all the range require you to source a suitable RTR chassis.

The prototype of this model was a standard Hunslet product of the 1950s, originally designed for industrial use; some were supplied to overseas users. BR ordered an initial batch of 24, which were delivered from October 1955 to January 1958; these went to Ipswich and Norwich, with one to each of Parkeston Quay and Yarmouth and two to Sheffield Darnall. These locos all had low flat cab roofs, and 3’4” wheels. A follow-up order for another 45 was delivered to Scotland, Yorkshire and the North East. These had 3’ 9” wheels, oval buffers, front steps, higher arc roofed cabs, larger cab doors, an extra window at the top of the cab side, deeper rear windows and a slightly different radiator grill. The later locos in the second batch had rounded window frames and a different smaller radiator.

The first batch was delivered in black with lion-on-mangle-wheel crests and 1948-series numbers 11136-43, 11161-76 (though at least one late delivery seems to have been in green with crest and 1948 series number) These became D2550-2573, and after the quayside lines at Ipswich shut in 1966 they went to Speke and Wigan. The second batch was delivered in green with 1957-series numbers D2574-D2618 between July 1958 and March 1961. The Hunslets were not long-lived: all but one were withdrawn in 1967-8 although a few were sold into industrial use with the NCB in the North East and Duport Steel in S. Wales, and Bulmers had one. The odd man out (11140, later D2554, originally an Ipswich engine) survived as the Isle of Wight shunter to become 05 001; after withdrawal in 1983 it was preserved on the island.

05 ShunterThe Silver Fox kit I bought represents a loco from the first batch, presumably because 05 001 was from this batch. There are clear visual differences between the two batches: the early have a somewhat awkward and antediluvian look the later locos look more stylish. Serious conversion work would be required to produce a second batch loco from the resin body, mainly involving raising and re-profiling the cab roof and revising the windows. Cast resin can be worked, so a skilled and experienced modeller might manage this, but it wouldn’t be easy. Silver Fox kits are produced in batches of about 100: it is possible future batches may depict a different batch so check exactly what you are getting.

The kit contains a one-piece resin body, very small resin castings for lamps, a horn, and control desk, an etched brass bonnet makers plate, and glazing. The bodyshell is not quite as crisp as the latest injection moulded plastic, though the detail is quite respectable. A crosscheck against the drawing in Marsden’s “Diesel Shunters” did not reveal any dimensional inaccuracies. You need to remove the small amount of flash with a sharp craft knife, and I also removed the most perfunctory moulded handrails I have ever seen and cleaned up with an emery board. I did this in the garden because dust from this resin does your lungs no good if you breathe it in over several days and you definitely don’t want it blowing about the house. I know someone who drills and carves resin castings underwater in a large washing up bowl to eliminate any dust. The instructions warn you to wash your hands after handling (but the same applies to whitemetal).

Having cleaned up the body shell (about 15 minutes work) I drilled small holes for handrail knobs to take Alan Gibson .45” brass wire; the knobs were fixed in place with thick cyano. The photo demonstrates all too clearly that brass handrail knobs are over scale, but the result is a great improvement on moulded lines. This was a first attempt and fitting the new handrails took less than 2 hours.

The bodyshell was then ready for painting (though it may be better to glue the tiny lamp mouldings in place first as a bond onto paint film is less secure). Nothing clever was attempted with the livery: plain weathered black with no wasp stripes is my kind of paint job. The loco is intended for my boxfile project set in East London: the Jpswich Quay shunters were sent up to Stratford for maintenance and Stratford was very reluctant to repaint shunters from black to green, so that many retained black well into the 1960s (The all time record was set by the small Barclay 0-4-Os sent to Holyhead in 1967; these were never repainted at all and were scrapped in the early 1980s still in black, the only locos in this livery to carry TOPS numbers.) Marsden’s book shows D2556 at Jpswich in July 1958, still in a smart looking black, so I modelled her.

This was my first attempt with an el cheapo spray-gun/airbrush bought off the Bachmann stand for a fiver, more Warleys ago than I care to admit, driven by a hastily purchased tin of compressed air from the local model shop. Paint was a quantity of Humbrol gloss black let down with white and mixed in a spare tin from a Humbrol Colour System pack which had also been lying in a cupboard for some years. Thinning was done with a cheap bottle of white spirit bought from B+Q on the recommendation of the man in the model shop, who does some high quality build-to-order kit-building. The first attempt went horribly wrong (dust and bits in the airbrush which had never been used before?) and had to be removed. I poured a quantity of white spirit into a jam jar, dropped in the body, and sloshed it around. Several coats were required to cover the resin fully: the paint was given several hours to dry between coats in a shoe-box in the airing cupboard. Airbrush-cleaning involved a (white?) spirited attempt to weather a 305mm scale branch line nearby. Fox BR crests and Modelmaster numbers were applied and the bodyshell was weathered with a very thin wash of mid-grey: aluminium window frames were achieved with a pot of Humbrol light gunmetal and a very fine brush. The whole thing was then sealed with matt Railmatch varnish from a spray can.

Motive power is a Bachmann 03/04 1 chassis, and the body is designed to re-use the Bachmann fixing screws and mounts. My chassis came from Phil, I and he had removed the Bachmann couplings and one mount; various improvised replacement mounts were not entirely effective so I stuck some Blutack on the top of the chassis block. It works, but the loco sits about 3mm higher than it should. Part of this is because the Bachmann chassis has I 14mm wheels — intermediate between the first and second batch of the Hunslets.

Tim Shackleton’s book on detailing diesels includes a dire warning about progressive oil contamination of the bearings affecting the split axle pickup system of these chassis and resulting in erratic running. As my Bachmann 03 does not run particularly well I was ready to listen. His remedy is to add additional conventional pick ups as a backup: easy enough on his Wisbech & Upswell 04 tram where pickups bearing on the tops of the wheels are hidden by the skirts but more difficult on the 05 where there is no cover. I resorted to L-shaped lengths of Gibson handrail wire soldered to the chassis block, sneaking down behind the back of the flanges and the brake rigging to bear along the backs of the wheels at keeper plate level. I couldn’t quite get the pickup round the bump in the keeper plate for the gear wheel while maintaining contact with both wheels, so the supplementary pickups only serve two wheels on one side and one on the other. Slow running is excellent.

For approximately £60 including chassis, transfers and bits I now have an unusual, distinctive and essentially accurate little shunter for the boxfile. As a project it was so easy it made the average plastic wagon kit look difficult and demanding: I started work on the Saturday afternoon of a Bank Holiday weekend, and the finished loco went to the club the following Thursday evening, most of the time being spent on the painting. Charlie Petty advises that the “baby” Hunslets (three 0-4-0 trains built for Ipswich in 1954) will be available this autumn and I’ll be getting one. I am surprised we do not see Silver Fox locos on every layout and I would strongly recommend them to any modern image modeller looking to add some individuality to their model railway.