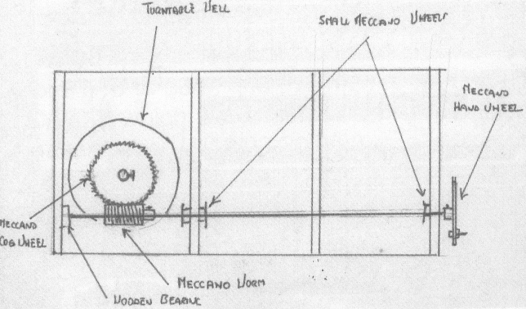 I have been in exhibition modelling for many years. I started with a huge project for a double track main line. It was a monster and nearly gave me a nervous breakdown. Its only redeeming feature was a derelict goods shed, which made to a photo published in the RM. However, it taught me one thing about exhibition modelling – KEEP IT SIMPLE!

My next effort was a modem image layout of Sandown on the Isle of Wight. Which, although tedious to operate was a great success on the circuit and being a very straight forward project, did not lead to my worst fears – at an exhibition – lying flat on the floor with under the baseboard with hot solder pouring on to your face!

I followed that with even more simplicity,a working diorama of Watchingwell, Isle of Wight. This was just a single line through countryside. Trains operating on a Gaugemaster shuttle unit. Again nothing really went wrong, but the layout was not a success on the exhibition circuit.

Belmont Road was sort of planned as an afterthought. I had at last began to conquer the black art of building kit locos. So the idea of an MPD seemed the best option.

I decided a turntable would be a good feature; it could act as a sector plate to save space and also, believe it or not turn engines.

Looking round the market it was hard to find a product that suited my needs. I could not accommodate more than a ten-inch circle and some the RTR versions seem very crude and unrealistic in appearance. I came across the SE Finecast model in their excellent catalogue and decided to give it a try. What a good company SE Finecast is! They were really helpful and were prepared to give after sales advice, without being made to feel a nuisance.

The ten-inch well version was ideal. The kit is really in basic form with a pre-cut hard plastic base on which you need to mount your own track. This is wired to a two wiper pick-ups that make contact on a centre boss in the well. These are excellent, have not failed once and are virtually self- cleaning. The table is balanced by two pairs of rollers at each end-running on a piece of finescale track. There is a choice of rollers,— go for the more expensive roller bearing version.

So a basis for a good well-engineered turntable this comes highly recommended. Fitting the track to the well was tricky and it was hard to get it a true circle. Mine works OK now but don’t look too closely. Thank goodness for weathering it really covers up a lot of botches. (Now you know why I do it!)

S E Finecast also supply Romford gears and pre-formed plastic sides. I have to say though, that neither worked for me. The sides are very flimsy and the little manual gearbox was just not up to the job. The torque required to move this lot was too much for it, in my opinion.

I decided to try something chunky, dependable and strong and above all SIMPLE. Not for me the fancy electronic drives with sensors, this is a “low tech.” operation. The turntable is a major feature on this layout, it must not go down at a show. So Meccano gears and hand turning. All it is, is a long length of brass tube (I would have preferred steel but could find anything suitable), secured through the baseboard battens with small Meccano wheels (See drawing). A big chunky worm drive on an equally chunky cog. Takes all kinds of battering and constant use.

I used for the sides, in the end, parts from the Dapol turntable kit inverted. The railings are small model boat stanchions and 0.7mm brass wire. I also slightly modified the hand turning control to make it look vaguely like an electric motor.

So there we have it no great work of electronic engineering and gismos but do we need all that?

But Since I wrote this, the turntable did go down at a show!

The linking brass rods went out of shape and the gearing would not line up properly. So under the board I had to go with just half an hour before opening. Fortunately I was able, with the help of my other operator, Clifford Reed, to make the thing work as a sector plate and we were able to half turn locos and this saved the day.

I have subsequently made some major repairs. A length of aluminum rod now connects to a short length of brass rod and joined by means of two small meccano wheels bolted flush on to each other (see drawing), and resembles a ship’s propeller shaft.

This is a very robust system and hopefully will last this time.